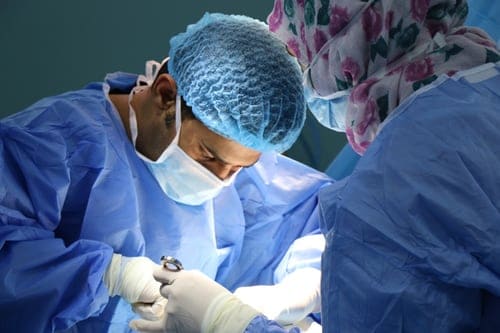 More surgeons are donning headsets as a growing number of augmented reality systems are approved for surgical planning and procedures. For example, Philips has debuted its own AR technology for minimally-invasive surgery, and a swath of startups are developing similar tools.

Augmedics builds its own wireless headsets, which can display CT scans through transparent glasses. Instead of having to look over at a screen, surgeons can use instruments and implants while looking directly at the patient. The headsets also feature a camera that determines the position of surgical tools, with a trajectory superimposed on the CT data.

The xvision consists of a transparent near-eye-display headset and all elements of a traditional navigation system. It accurately determines the position of surgical tools, in real-time, and a virtual trajectory is then superimposed on the patient’s CT data. The 3D navigation data is then projected onto the surgeon’s retina using the headset, allowing him or her to simultaneously look at the patient and see the navigation data without averting his or her eyes to a remote screen during the procedure. The system is designed to revolutionize how the surgery is done by giving the surgeon better control and visualization, which may lead to easier, faster and safer surgeries. xvision is now available for sale in the United States, with headset distribution expected to begin in early 2020.

“The ability that Augmedics’ xvision provides to visualise the patient’s spinal anatomy in 3D, coupled with live CT images as a retina display, is game-changing,” said Frank Phillips, M.D., professor of Orthopaedic Surgery at Rush University Medical Center, where researchers used xvision to successfully complete a laboratory study. The study, which had 98.9 percent accuracy, was conducted as evidence to the FDA to evaluate the system.

“The efficiency and accuracy this augmented reality technology enables in placing spinal implants without looking away from the surgical field – as well as the ability to “see the spine” through the skin in minimally invasive procedures – differentiates the xvision from conventional spinal navigation platforms. The economics of the xvision system are also compelling in both the hospital and the surgicenter environment,” Dr. Phillips added.