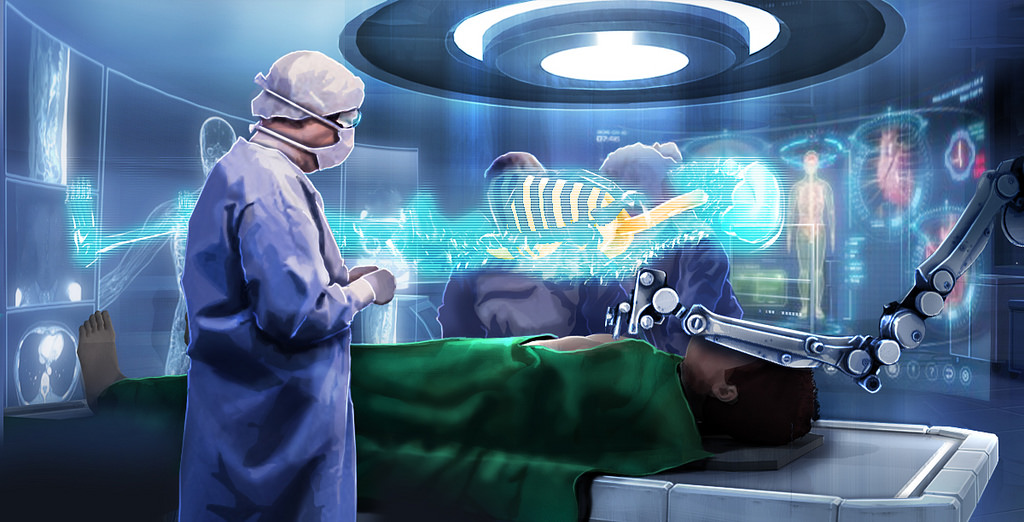 Augmented reality is already making inroads in several industries, including healthcare. But how exactly will it affect the diagnosis and treatment?

Augmented reality and healthcare are helping in shaping technology in the coming year. The research conducted by Goldman Sachs has proved that the Global market for the technologies of AR and healthcare is worth $5.1bn by 2025.

Put it this way: We all know how important digital resources have become, especially in the internet age, for looking up resources, help and advice as we work. But what if we didn’t have to break off from what we are doing to go to our laptop or tablet to find what we are looking for?

Imagine if it was there immediately in our field of vision, or in our ears, as we were working?

This is what AR does – and much, much more. Let’s look at a few AR applications in today’s healthcare industry:

Anyone studying medicine has to learn anatomy. There are many ways to do it — flashcards, textbooks, charts, even things called bone boxes (imagine opening a box of bones and having to use some reference aid to figure out what it is and its characteristics).

Those are tried and true methods, but ARnatomy wants to make them better.

They’re working on a few projects, including an app that uses OCR to match a word like femur, for example, with visuals and info on the bone, or one that lets users manipulate a “a tangible skeletal model of bones affixed with augmented reality (AR) targets,” according to their site.

Computer-guided surgery closes the gap between pre-operative images and the way a surgeon conducts the operation. One of such solutions is ARGUS.

The goal of the ARGUS system is to assist a surgeon during the intervention planning by displaying in real-time both pre-operative computer tomography and intra-operative ultrasound data in the form of 3D objects using optically tracked augmented reality glasses.

The ARGUS project can be used either as an orientation tool for planning the surgery or modifying previously plans in the surgical theatre when something goes wrong.

It allows the collaboration between surgeons and radiologists by providing them with an audio and video connection to ensure a high quality of the operation.

Thus, a radiologist can interact with the augmented image while remotely assisting the surgeon.

Another intriguing trend we are seeing with the use of AR in healthcare is the development of applications that empower patients to play a more proactive role in their own care.

The EyeDecide app, for example, is, on the one hand, another example of a 3D anatomical visualization tool, this time demonstrating the structure of the eyeball.

But beyond that, it also offers visual simulations of different eye conditions. Free on iPhone or iPad, users can self-diagnose by matching the simulation to any distortion they are experiencing in their own vision, and the app then even offers a list of suggested eye specialists in their area to consult further.